I’ve read a lot and heard a lot about the Shane, Lori and Rick triangle. Here’s my two-cents about it:

He loves Lori. From what I’ve seen, he has loved Lori for years. Long before the apocalypse drew her to him. As much of a “prodigy, banging 30-year olds on the regular” as he was, I believe he was always jealous of Rick for finding Lori. Of course, modern society left Shane at a disadvantage, because Rick was his best friend. Then Rick and Lori eventually married and had Carl. But I believe Shane always envied Rick because of that, and always saw what Rick had as his.

I mean he essentially saw Rick come into his own as a man and a leader, (this requires some assumption, based primarily on Rick’s authoritative demeanor in Days Gone Bye and Shane’s proceeding subservience leading into Season Two). Shane possesses the drive and natural protective instincts that a leader needs, but he does not have the right attitude nor the much-needed ability to detach his feelings and look at things as right versus wrong. I’ve said it before, and I thoroughly believe it: You need more than guts and determination to live in zombie land. You need compassion and good character. Just because the world’s gone to hell doesn’t mean you need to follow suit. Fair enough? 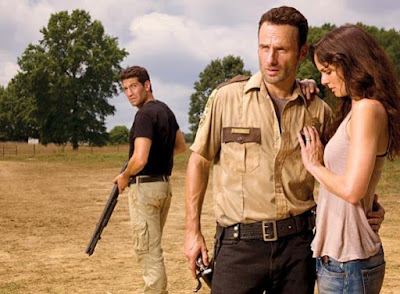 Her relationship with Rick was rocky before the introduction of walking corpses. Can you imagine that in your wedding vows? ‘Till death do we part, in sickness, health, and ravenous walkers.’ Married with zombies is a bit of an understatement. I believe she wanted Rick to be more assertive. To “yell at me when he’s mad,” and not take her crap all the time. Hell, she gave him permission to yell at her after the morning after pill fiasco. How twisted is that?

That is one of the reasons why I think she was drawn to Shane after the apocalypse. Yeah, he lied to her about Rick’s death, though in his defense, that hospital was a hell-mouth. But I think she was too quick to believe him. Again, the introduction of zombies kind of forces one to deviate from ‘normal behaviors,’ but I believe it does that for the already weak. I think Lori was looking for a way out of that relationship when Shane offered her salvation.

There’s no doubt that Shane and Rick are two different men; Shane is the aggressive, ‘inherent’ alpha male that reacts; Rick is the passive, unlikely alpha male that thinks. They each have desirable qualities, but as a woman, I think Lori most identifies with Shane as her close to perfect mate. I think she loved him. But when Rick turned up alive, it through everything into question. Does she love Rick because she cares deeply for him? Or because she’s married to him?

I definitely believe she is torn between both men, and while her motives may not be pure, her actions are necessary to push Rick into a final confrontation with Shane. Tell it to the frogs. 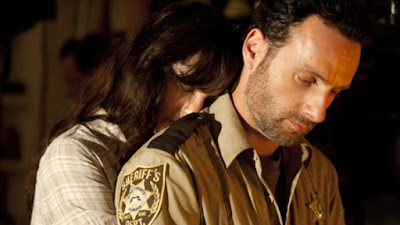 Rick is a man that does not encourage his violent side. He is by no means a coward; he showed that in the closing minutes of Nebraska. But I do believe he needs to brazenly meet confrontation with the same determination he had when confronting Dave and Tony. Namely, those choosing to challenge his leadership; in a word, Shane.

Now just because modern society has vanished doesn’t mean everyone has to follow Rick. They are free to make their own decision to leave. But since no one is attempting to go it alone, they all need to respect Rick. He is making the tough decisions, considering right and wrong in a world where most would pick wrong over right in an attempt to survive. Now I do not agree with all of his choices; for example, I would have shot Randall in the head and moved on.

But I respect what he is trying to do. He is trying to hold on to humanity in a world that forces most to abandon it. Now Rick has been trying to avoid a fight with Shane because Shane is his best friend. He values Shane’s commitment to the group and the necessary skills he brings to the table. But just like a wolf pack, there can be only one Alpha. And when an Alpha is challenged, like Shane has been subtly, (and not-so-subtly) doing, a fight is inevitable. We are, after all, animals.

So when it really comes down to it, this Rick versus Shane issue needs to be resolved. Not just for Rick to reclaim his family, but to show Shane that he needs to either respect Rick and his decisions or get out. I hear Nebraska’s nice.
at February 21, 2012
Email ThisBlogThis!Share to TwitterShare to FacebookShare to Pinterest
Labels: character development, Lori Grimes, Love Triangle, Rick Grimes, season 2, Shane Walsh