Let's focus on something a little bit more than the deaths.  Forgive me Steven Yeun, and Michael Cudlitz!  I can’t begin to explain how much you have brought to TWD for all of the fans, but everyone’s already doing that now.  Including fan created obits.  I know that for months, this was a huge focal point as everyone waited in anticipation of the fate that awaited 2 of our TWD cast.  Could there be more?

"The Day Will Come When You Won’t Be"
We should all remember those words that were said to Rick Grimes by Dr. Edwin Jenner at the end of episode TS-19. 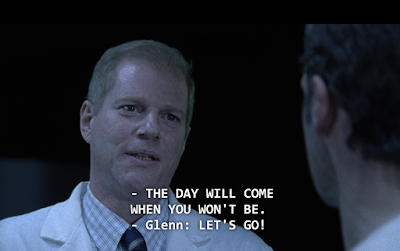 Season 7 premiere episode certainly lived up to its name.  However, could this be the first part of the foreshadowing of what’s to come for season 7?  Andrew Lincoln has already said that this will be the most difficult season for Rick Grimes.  In the past, the hardest thing for him has been losing the people that he has made family.  The list of people left is quickly dwindling, and I can’t help feel that Maggie’s fate is in question.

Glenn said, “Maggie, I’ll find you.”  Could this also mean, I’ll be waiting for you on the other side?  It’s hard to know.  I know that there is definitely a correlation to a past episode between Glenn and Maggie.  But, could it mean more?  Especially after the leaked alternate death scene for the TWD season 7 premiere makes me a little hesitant in believing anyone is safe.  Especially when it seems like TWD writers are taking a page from George R. R. Martin’s handbook.

In an interview with Steven Yeun, and Michael Cudlitz, they did say that they’ve known for a while that their time in TWD was coming to an end.   That one of the hardest things to do was to keep it all a secret.  Both the actors and AMC went to extraordinary lengths to keep Negan’s victims a secret.  Everything from being on filming sites where they weren’t needed, keeping it from other actors, going in places with cloaks on, and even to go as far as, filming alternate scenes that weren’t going to be used.  Does that mean that the ‘leaked’ alternate ending, is it really an alternate ending (because this could be Maggie’s last season), or was it staged to keep everyone’s suspicions on the fence for the première episode?

In recent interviews with Greg Nicotero, he says that "Glenn is not dead; Abraham is not dead," Nicotero said. "Their spirit lives on and the fact that you have Maggie pregnant with his baby, and you have Sasha and Rosita carrying the memory of Abraham. There's more story to tell with the result of what happened with those people, so I certainly look at it a little differently."

Does that mean that Maggie, Sasha, and Rosita are as ‘safe’ in the TWD world as they possibly can be?  If TWD writers are taking a page from George R.R. Martin, one of the hardest things to swallow will be another Red Wedding, Talisa, unborn child.  I’m not saying Maggie is TWDs princess, but…  the similarities are hard to ignore.

Let's touch on the shared Sunday dinner meal.  Did you catch the 4 candles on the table, and Morgan putting out two of them?  Should we be expecting at least 2 more of our beloved characters to meet brutal ends this season?  It's really hard not to point towards Maggie and the unborn baby.

So many questions, foreshadows, theories that are now being created.  Only time will tell the fate of our beloved cast members.

at October 27, 2016
Email ThisBlogThis!Share to TwitterShare to FacebookShare to Pinterest
Labels: Season 7, The Day Will Come When You Won't Be, Thoughts & Ideas