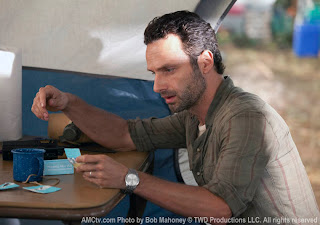 After watching this episode my heart is breaking for our hero Rick Grimes. After everything he has been through already here comes not one, but two massive blows.

Finding out your wife is pregnant during the zombie apocalypse would be bad enough but to then also find out that she slept with your man-whore of a best friend because she thought you were dead would be devastating. Poor Rick just takes it all in stride, he doesn't scream at her just asks a simple question: "The world went to shit and you thought I was dead right?" But Lori hesitated on answering this question. Maybe it's just me, maybe I look too much into things but I was wondering on what this pregnant pause (pun intended) meant? Were Lori and Shane having an affair prior to Rick getting shot? Does she realise what she could have lost and not want to tell him this part as it would be the last straw? Is that why she was so unhappy and caused an argument with him about nothing like we saw in the flashback? I don't know but it is definitely some food for thought.

I am so glad that Dale confronted Shane in this episode. About Otis and sighting his gun on Rick. Those two things had been bothering me as I knew Dale had caught on. Dale doesn't seem like the type to beat around the bush, so I am glad he didn't here. All though now I think he has to live in fear that Shane is going to turn him into barn bait. Shane and Andrea getting it on bugged me even though I saw it coming. I haven't had a problem with Shane, I just feel like he says what he wants to suit him. Like last week when he told Lori all that mattered to him was keeping her and Carl safe. Obviously, having a quickie with Andrea doesn't hurt his feelings any either. And yes I know Lori told him to move on but I don't believe he did. This was Shane being self-serving as always. As for Andrea, I am still mad at her for grazing Daryl last week. I see where they are trying to go with her character and Shane seems to keep on heading downward.

As for Glenn and Maggie, I wish she would stop being so mean to him. You'd think she was in grade school the way she love/hates on him. But I guess Glenn likes the abuse. Can't be too picky during the end of the world anyway, am I right?

Even though Lori made a bad decision when she thought Rick was dead, I hope Rick forgives her and they stay together. I feel like she loves and respects him because he is a reasonable, law-abiding, upstanding man. Even though some of those things cause him to make decisions that get on her nerves. She knows he does what is right for everyone, her and Carl included.
at November 21, 2011
Email ThisBlogThis!Share to TwitterShare to FacebookShare to Pinterest
Labels: season 2, secrets