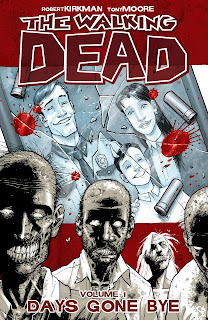 The Walking Dead comic series. You either already know it, or you don’t. I guess this article is aimed at those who don’t.

I’m assuming that you have watched the TV series on AMC and finally heard that it was based on a comic series of the same name, written by the incredibly talented Robert Kirkman. Maybe you saw them on the shelf at the Barnes & Noble. It’s slowly calling you; someone you know has recommended reading them. Before you go and buy that first issue there are some things you should know. And there is a warning you should take seriously.

Let’s Start with that Warning

You may not be ready for this comic. You may not be “tough enough”. I know you’re scoffing, but you have to know strong “John Wayne” types have broken down and written Kirkman to tell him what a cold bastard he is. You laugh, but you’ll find out. I’ve had people come back and say, “You told me, Dave. And you were right.” I can just nod in understanding.

Are you ready for the comic? There is a simple test you can give yourself. In Season 2, Episode 7, “Pretty Much Dead Already,” (also known as the mid-season finale – whatever that is), it is revealed that poor little Sophia has indeed been bitten and is now a zombie. Lori grabs little Carl tight and tells him not to look as his friend Sophia is kindly and humanely put out of her zombietude by Rick. There are joke images floating around the internet ridiculing Lori for telling him not to look, but not covering his eyes. But there is little debate that poor little Carl needed his innocence protected.

Test Question: Should Lori have covered 8-year old Carl’s eyes so he wouldn’t have to see Sophia (about the same age) get put out of her misery?

If you answered an instinctive, emphatic “yes,” then you are not ready for what Kirkman has in store for you in those awesomely illustrated pages. Trust me. There is no “wrong” here; you’d just be happier spending your money on something else and remaining ignorant. Just know this, whatever happens in the The Walking Dead TV series, no matter how “rough” it seems, it is the kinder, gentler kid brother of the comic. If the TV series is Glenn, then the comic series is at least Daryl. Or, maybe it is Merle and Daryl on a Friday night with too much beer and nothing to do. Get the picture?

Having warned you out of kindness; having said, “If you are a kind, gentle soul then don’t open, there are dead inside,” I can now say, “DON’T miss this! Don’t cheat yourself out of an American literature masterpiece.” I know, comics are mind rotting junk. Kirkman has transcended that image (often justly deserved), and transcended the genre as a whole. Reset this all in your mind as “graphic novel” instead of “comic” and experience an incredibly brutal and brutally honest examination of the human spirit under the ultimate duress.

No Spoilers, Dang You! 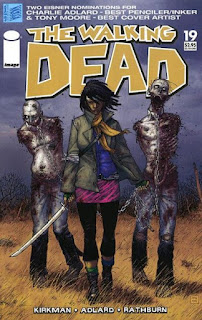 One really important thing to know about the comic is that you are not going to spoil your enjoyment of the TV show, nor are you going to “spoil” some event. Likewise, your love for the show won’t mess with your enjoyment of the graphic novel. Kirkman has stated that his story is in an alternate universe where the idea of zombies never happened so people had no clue. The show is another alternate universe entirely.

Obviously I’m going to save some stuff for other articles and they’d need lots of room to discuss, but I can give you examples. Shane never makes it out of the camp where Amy dies. (Yeah, that’s a little spoiler, but it in no way prepares you for the where, how, or why.) Daryl doesn’t exist, but other characters just as great do. Characters are different in so many ways that you will experience a little vertigo. Carol is a little hottie; Andrea a strong, competent sharpshooter; Lori is pretty likeable. Even the zombies are “different.”Dale is the only character who remains the same in both mediums and I wonder if even Kirkman knows why.

Certain things never happen in the show, like Wilshire Estates, which will actually add to your suspense. There is a special issue, “Rise of the Governor;” who is he? Good? Bad? What? And once you know, you’ll be waiting. Will he be in the show? Is he coming? And if he does, how will he be different? Everything that does happen in both happens very differently. Yes, Carl gets shot by Otis, but in totally different circumstances. No, you cannot spoil either the show or the graphic novel by experiencing the other.

Conveniently Packaged for Your Schedule 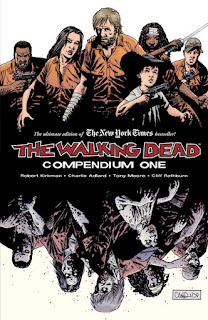 One thing that is nice is that you can get it sliced in bites that fit your schedule. The single issue comic books are about 20 pages, easily taken down on your lunch break if you turn off Twitter. There are the 6-issue trade paperbacks (which I am buying). I like these as you get a really good punch in the face yet time to rest (I’ll explain later). There are the 12-Issue hardcover books and the 48-issue compendiums. If you like to get in bed, pull the sheets up, and really get in a good read, then the compendiums are a good bet. Another advantage to these formats is you can match your budget. You also can find electronic formats on Amazon and such.

Wrap It Up, I’ll Take It

I’m going to do the editorially stupid and tell you now to just ignore the first half of this article. Go. Buy. Become addicted. You can cuss me later if you feel like it. You will definitely cuss Kirkman at some point.

Kirkman stresses at every chance that the whole point IS the human condition. Zombies are just the weather, the tidal wave, the sinking ship. How does one person become stronger and another break? When civilization has shattered what social morals still apply? He dances his characters through an amazing, brutal series of events where absolutely no one is safe. That alone should be a warning. Everyone is so used to Hollywood shielding the hero, protecting the popular. Kirkman shows that all humans are truly equal to a zombie hoard or other “stressed” humans. You will want to call him evil, but that is like calling a lion or a hurricane evil. It just doesn’t apply, especially when he is just holding up an honest mirror. 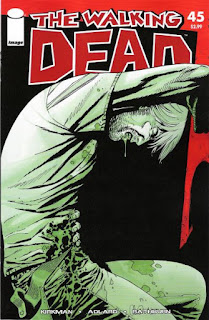 I had the flu when I first read the graphic novel. I had all 91 available issues on my laptop… waiting for me patiently. I’m not a comic reader. I read a lot of them when I was a kid, but nothing in the past 20 years for sure. But I had the flu and the bed and nothing else to do really. “What the hell? Let’s take a look at this”, I naively thought. Suddenly a few moments/hours later I realized I had read 50 issues, then 60. I just couldn’t stop. In the end, I read all 91 issues in a 14 hour marathon. I loved it and I think this is the only way to really “experience” the intensity. The characters get no breaks from the horror and as a reader you don’t either. But I also felt like I’d been mauled by a bear, eaten by a lion, crapped out, and then buried in the sand… and that wasn’t the flu talking. I had been through Kirkman’s vision.

Six months ago I would have boldly said, “Hell ya! You cover Carl’s eyes! What the hell are you thinking?!” But today, I know.

I know that, in the case of something so world shattering as a zombie apocalypse, I was wrong. This isn’t a “John Wayne” reaction. I’ve come to realize that Kirkman’s vision is sharper than mine and more honest. In the graphic novels Carl experiences a life that censorship laws and soccer moms and Child Protective Services won’t let on the silver screen. But it is those censorship laws and soccer moms that are out of sync when the reality is the dead eat the living.

Kirkman’s vision is sharper, more accurate. I only read about the zombie apocalypse through his eyes and I have changed. For the better I hope. And when you “know” we can get together and chat.
at February 28, 2012
Email ThisBlogThis!Share to TwitterShare to FacebookShare to Pinterest
Labels: Compendium, The walking dead comics