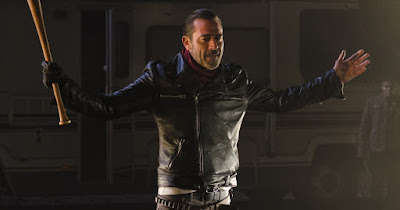 It seemed like the premiere was going to start off really well and reveal who Negan killed, but instead, it dragged it out. As if we needed to wait longer! I thought they ended season six on a cliffhanger so that when the show came back it would immediately show who died. So after the first set of commercials, I thought “Okay now maybe we’ll get to the action.” I was wrong as we had to see Negan play with Rick as if he were food. It was actually disconcerting that Rick thought he could still be a hard ass and stand up to Negan instead of shutting up and keeping his friends and family safe.

We then get a flashback and they reveal it was Abraham that was victim to Negan’s bat Lucille. Though Abraham took it like a champ, it still didn’t have quite the reaction I thought it would. I did think the writers were smart in showing Rosita upset, rather than showing more of Sasha because we didn’t see that much of her and Abraham together. Rosita knew Abraham before the rest of the cast so it makes sense she would take it harder.

Of course, I expected Daryl to be idiotic and go after Negan. That was ridiculous because Negan told them to stay in line and not fight him or he would retaliate. What didn’t they understand by that? He literally beat the brains out of their friend!

Once that happened I knew it meant bad news for the group, and as I anticipated Negan decided Lucille was hungry for more and swung at Glenn. Now for those of us who read the comic books, that’s no surprise. Regardless, the Walking Dead doesn’t always follow the comics so no one was sure who was on the chopping block…literally! Glenn’s death was way more gruesome than Abraham’s, and they actually followed true to the comics with that one.

The fact that Negan is capable of such an act, makes me wonder what happened to him to bring him to this point. Sure we got to see the group engage with cannibals and murderers, but this…this is different. Negan kills to make a point. He clearly can’t fend for himself if he has to steal the resources of other groups. Why couldn’t he do what Rick and Alexandria did? Obviously, the character has gone to a dark place, and watching him kill Abraham and Glenn makes me wish he gets what he deserves.

If Rick wasn’t so cocky and didn’t let his pride get in the way, Abraham and Glenn would still be alive. Now I know that it’s all part of the plot, but it makes Rick less likeable. I did like that Negan shows he’s in charge. He continues to prove his stance as a leader well after he kills Glenn. When he speaks it’s like listening to your parents say “Get over here now. Don’t make me tell you again!”

Despite some minor pet peeves with Rick’s decision making, it was a pretty spectacular episode. I’m pretty bummed they chose two amazing and dynamic characters to kill off, but it was bound to happen sooner or later.
at October 24, 2016
Email ThisBlogThis!Share to TwitterShare to FacebookShare to Pinterest
Labels: Negan, Review, Season 7, Thoughts & Ideas