Not only did we learn that the fate of not just one, but two beloved characters are potentially at steak from the Season 7 Sneak Peek - we also got to find out that Steven Oggs' character does in fact have a name, and that is Simon. 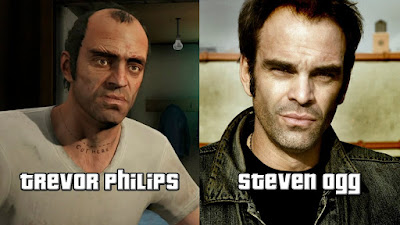 Steven Ogg rose to fame thanks to his voice acting in GTA IV for the role of Trevor.

Hearing him talk about Rick having "A hatchet" in the sneak peek, only to correct himself when Negan seemed confused... "Uhhh... he had an axe" could just as easily have been pulled from Grand Theft Auto V itself. He really is the perfect guy for the role - his voice has that chilling, psychopathic tone. (That could just be me that feels that way due to being an avid Trevor fan.)

Negan mentions to Rick that having a right hand man is important. Some fans have taken this to mean that it is in fact Daryl who faces Lucille, others think it's a subtle nod to the comic meaning Rick is going to lose his right hand - could Negan be about to chop it off in the RV with Ricks' very own axe?
at October 15, 2016
Email ThisBlogThis!Share to TwitterShare to FacebookShare to Pinterest
Labels: Axe, Hatchet, Negan, News, Simon, Steven Ogg