The following interview is taken from Entertainment Weekly. They had the chance to sit down and chat with Andrew Lincoln himself in regards to the most recent episode of The Walking Dead. Andrew discusses his own personal thoughts and feelings he had whilst filming, as well as giving us a deeper glimpse into the character of Rick Grimes, and the state of mind he's currently in.

I thought this interview was too good not to share, but please know that I am taking absolutely no credit for it. This is all thanks to EW. 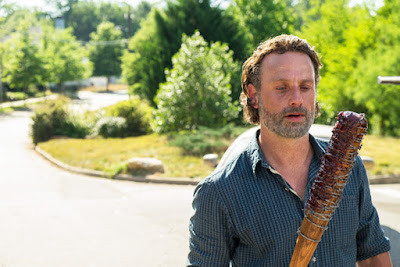 ENTERTAINMENT WEEKLY: Obviously what happened in the premiere was all kinds of horrific, but is there something even more humiliating in a way of Negan coming into Rick’s community and just taking whatever he wants, threatening whomever he wants, and Rick having to just sit there and take it? What was that like for you having to play that?

ANDREW LINCOLN: It was work. Everything was all about the return that first episode, and everybody was nervous about getting it right and getting back to where we left it, so there was a lot of focus on that on that episode. I thought, foolishly, that it was going to be a kind of cakewalk for the rest of the season, and then this episode shows up and you realize that all of it is reactive. It’s all about sucking it up. It’s easier to kind of transmit a thought if you’ve got words, but if you don’t have words, you have to really feel it, otherwise it’s not going to transmit. So it was unbearable.

Jeffrey [Dean Morgan] always said that he could tell that it was working when I started getting agitated on set. I think that it was an astonishing kind of abuse. You know, you wait a few episodes and you think, “Oh, maybe there’s going to be Rick’s return,” and actually, he’s not. He’s acquiesced. He’s done. He’s like, “No. No, no, no, no.” But then you have the reveal at the end, which is key, I think, as to what he’s doing about Judith.

Yeah, I definitely want to get to that in a minute, but first off, I’ve got to know what it was like having to carry Lucille around for the entire episode. I remember being there on set and the first thing I saw when I got there was you carrying Lucille. I was like, “Oh, that can’t be good.”

Yeah, it just sucks. I mean, it’s been a great acting opportunity, but I wouldn’t say it’s been fun. It’s been emasculating the leader and having to be publicly humiliated and taunted and tormented and all those kind of things, and it sucks. I’m not going to lie to you, it’s been pretty bad.

I love that one scene, though, at the end where Negan kills the walker with the candlestick and we see you sort of tighten your grip on Lucille a little bit, and Rick’s fighting every urge in his body to just take a swing right there.

Yeah, because he knows what the net result is. It’s everybody dies if he takes that swing. He’s being educated by this guy, and it was about holding my breath, really, that whole episode and him pushing and prodding and needling this guy as much as he can, because he’s checking to see if this guy is really kneeling before him, you know? Rick’s smart enough to realize that if he does take that swing, everybody dies.

It’s interesting how you described it as him holding his breath through the whole episode because then there’s that moment at the end right after Negan leaves where Spencer basically calls Rick out.

Not a good time. Not the best timing.

I couldn’t help but wonder: What do you think happens there if Rick is one foot away from Spencer instead of about 30 feet away?
It was neat to be able to have that little bit of the bite, the old Rick, for the audience to know, “Okay, he’s sucked it all up, but he’s still a powder keg. He’s not done.” I think that, yeah, Spencer is difficult to love. He’s hard to love, Spencer.

Okay, let’s talk about that huge scene between Rick and Michonne, which marks the first time we’ve heard him openly admit that he knows Judith is not his biological child. Is that something he’s finally admitting to himself, or just voicing aloud for the first time?
I think voicing it aloud. It’s one of those watershed moments that happens, certainly between the two lovers, between Michonne and Rick, that brings them together. It’s a very important moment in understanding his psyche and going, “This is what I’ve been doing for the last two years. I’ve accepted the situation and I will accept the situation if it’s going to save lives and if it’s going to protect the people I love. I will take it.” It’s another perfect kind of quiet heroism. You know, he’s a stepdad and it doesn’t stop him loving his child, but he kind of has accepted that it’s not his.

I told Jon Bernthal [who played Shane] that, in the pool with his kids — I hadn’t seen him for a while — I said, “Dude, you’re never going to believe this,” and he was like, “Oh, my God, no. What?” It was hilarious because he was like, “No. What… you… really? Really?” And he took it all so perfect. It was so Jon. It was beautiful because it was almost like he wanted to replay his scene again. He wanted to go back and reshoot the thing and I was like, “Dude, I know. Come on… they… you know.” But it was a very, very key point that [shworunner Scott M. Gimple] told me before I even got script 1 [this season]. We talked about it in the hiatus because it is very, very key.

It’s a huge revelation for the audience.

Well, it is, but it’s also a great secret. It’s a great, great secret that he’s been holding on to for a long, long time. It’s also a very smart way of understanding why he’s behaving in this way, because he’s been behaving that way with regards to his child since the outbreak, since he got the news. There’s a scene with Lori where it’s almost touched upon — outside on the farm, there’s a scene where he makes peace with whatever’s gone down and that’s, I think, a key moment. He doesn’t voice it, but it’s there. It’s in the air.

Well, it’s fascinating, because it’s the type of thing where it’s always out there in the show, but as a viewer, you sort of you move past it because there’s other things to think and worry about. So you sort of forget that this is always there and always in Rick’s mind because maybe you haven’t thought about since season 2 or 3.

Right! That’s right, and that’s the cool thing about long-form TV is the middle of this crazy ass episode that is about bringing people into line and continuing to test a leader of another community that Negan’s taken over, you have this revelation that is almost like a sideswipe. It’s very small and it’s great storytelling, I think, from Scott.

It was funny because I knew it affected people because [cinematographer Michael E. Satrazemis] just came and everybody kind of gave me a hug after. I think everybody really was hurting for Rick because it’s just like a great heroic act for the sake of the community, for his people, and for this child. He’s just done it, and for his son. He hasn’t told anybody that, you know? We’re asking a lot of people to sit through, to have their family smashed apart and this new guy on the block, but believe me, it’s moving to a very exciting place.

What did you think of the above interview?
at November 15, 2016
Email ThisBlogThis!Share to TwitterShare to FacebookShare to Pinterest
Labels: Andrew Lincoln, Entertainment Weekly, Interview, Rick Grimes